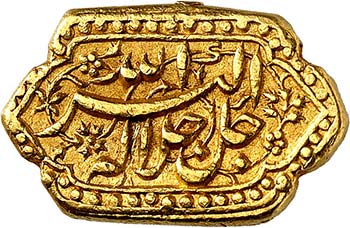 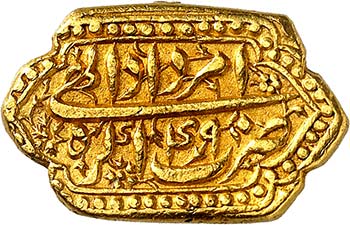 Notes
This coin features several of Akbar's innovations to the coinage. The first is its weight. Akbar introduced the Mohur as the standard weight for his gold coinage at around 11 grams. He then initiated his own dating system, the Din-i-Ilahi (literally Faith of God). This calendar incorporated elements of the different religious beliefs in his empire. The Ilahi calendar was solar, divided into twelve months, rather than the lunar Hijri calendar. Months bore the same names as those of the Persian kings, corresponding to the feasts of the Zoroastrians. The first Ilahi year was that of Akbar’s accession in AH 963. Akbar used the unusual elongated and scalloped lozenge shape of the mihrabi Mohur on only two occasions and both were struck at the Mughal capital of Agra. They were made in the shape of the mihrab, which is the niche in the wall of the mosque indicating the qibla, the direction in which Muslims must face when praying. The first, and better known type, dated AH 981AH (1573/4 CE), features the Kalima, the names of the Rashidun (the Four Orthodox Caliphs) and the date on the obverse, with Akbar’s name, titles, the invocations “khallada Allah mulkahu jalla jalala” (may God perpetuate his rule, may his glory shine forth), and the mint name with the epithet baldat (meaning city or town) on the reverse. This coin was not intended for circulation, but as a presentation issue. It was struck in the same year as the completion of the Agra Fort and could have been intended as a gift during the inaugural ceremony. The present coin is an example of the second, and much rarer type. The obverse bears the invocation “Allahu akbar jalla jalala” (God is the greatest, may His glory shine forth), obviously referring to Akbar’s name. Akbar made this invocation standard for all the coins he struck using the Ilahi era. On the reverse is the name of the mint, Akbar’s capital Agra, the Ilahi year of his reign and the Ilahi month. Like the first mihrabi Mohur, the extreme rarity of this type suggests that is was intended as a special issue to be presented to Akbar’s courtiers.