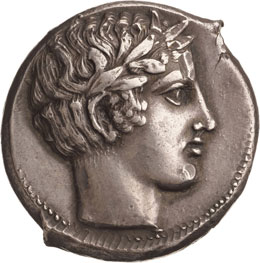 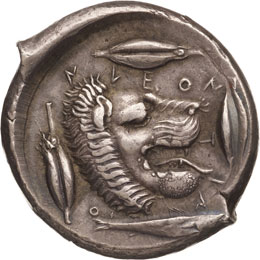 
Italy. Sicily, Leontinoi.
Tetradrachm, c. 420 - 415 BC. (Silver, 17.47g., 25.2mm). Laureate head of Apollo to right, his hair short / ΛΕΟΝ-Τ-ΙΝ-Ο-Ν. Lion’s head right; four barley corns around. Boehringer 66 (same dies). McClean 2342 (same dies). Rizzo pl. XXIV, 13 (this coin).
This wonderful head of Apollo is fully classical in technique: it was, in fact, produced by a master engraver who also worked at Katane (see Boehringer pl. 13, D). The head no longer has any numinous character, but surely resembles a typical representative of the local aristocracy, a ‘golden youth’; in fact, he was very possibly modeled on an actual person known to the engraver.