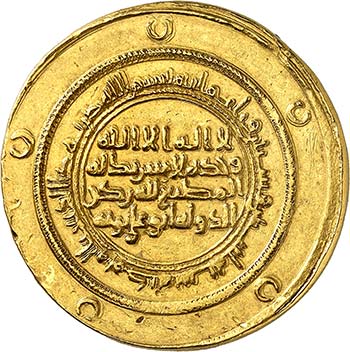 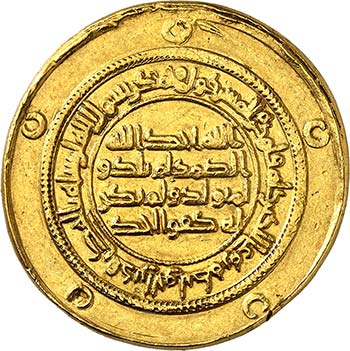 Grading/Status: Extremely fine and of the highest rarity.

Notes
The production of special coins and medallions find its roots in Ancient Times. Although this was started under the Greek civilisation, this art finds its most important development under the Roman influence. Medallions were bestowed by the Emperor or the Senate as honorary gifts. In the Islamic world, the practice of producing special coins or medallions started during the Abbasid dynasty, under the reign of the caliph Harun al-Rashid AH 148-193 (786-809 CE), but it was during the third century Hijri that the practice finds its apogee. These coins, known as “donatives” were usually struck on specially prepared broad flans with generous margins on both obverse and reverse for presentation to high officials in the Abbasid court and administration. They were a prestigious mark of honour for their recipients. If most of these special coins were of standard weight, fractional issues were also specially manufactured to be used as a scattering largesse at a ceremony or occasions when the ruler's generosity was used as a tool of state. Soon after the mints started to issue larger pieces for high ranked officials or the be presented to the caliph himself. The present piece appears to be the earliest ten Dinars coin known today. We need to wait more than two centuries to find a parallel. This exceptional ten Dinars coin was struck by the Buwayhids, an Iranian origin dynasty during its Golden age when they controlled most of the Islamic world. Baghdad itself was seized in AH 334 but they kept the Abbasid caliph in place in order to maintain the religious hegemony over the Islamic world. They named themselves as the caliph’s protectors but they effectively ended his secular authority and reduced his role to a purely religious one. The needed his presence as the Sunni world would have never accepted a Shi’ite ruler. This coin struck in a purely Arabic tradition and design but from an Iranian mint is a perfect witness of this ambivalence between power and religion during the “Iranian Intermezzo”.