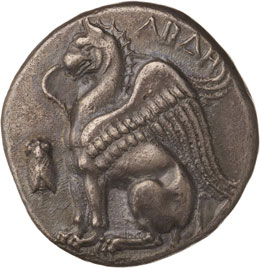 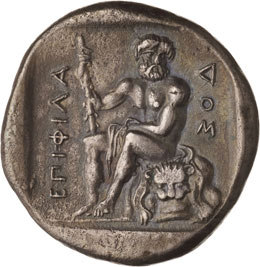 
Northern Greece. Thrace, Abdera.
Stater, c. 362 BC. (Silver, 13.07g., 24mm). ΑΒΔΗ Griffin seated to left, his wings slightly spread; to left, cicada seen from above / ΕΠΙ ΦΙΛΑ – ΔΟΣ (last three letters retrograde) Herakles seated half-left, on rock covered by a lionskin, his torso slightly facing and his head turned partially to right; holding club resting on his right knee with his right hand and resting his left on his left thigh; all within shallow incuse square. AMNG 105. Chryssanthaki period VI, pp. 122-123. May 393/396 (obverse A 276/reverse P 322). SNG Lockett 1132. Traité IV, 1379 and pl. CCCXXXVI, 12.
Abdera (IACP 640) was initially founded by Klazomenai, c. 650 the colony failed due to Thracian resistance; it was refounded c. 544 by refugees from the Persian conquest of Teos (For the rest of its history Abdera maintained close relations with her mother-city). It rapidly became a major power in the northern Aegaean and a rival to Thasos. The city was severely damaged by a Triballian invasion in 376/5, which was, however, repulsed with Athenian help, but Abdera never fully recovered and was taken over by Philip II.The quality of the engraving on the staters minted in Abdera during the late 5th and early 4th century is particularly fine; the dies must have been cut by some of the best artists of the period. This piece is surely one of the best of them all. The griffin is shown seated, but as if it had just landed and begun settling down since its wings still seem to be fluttering. As for the seated Herakles, he looks out pensively as he rests from his labors but his innate strength is clearly visible in the way his powerful figure has been depicted. This is surely one of the finest numismatic representations of Herakles to be found in Greek coinage.