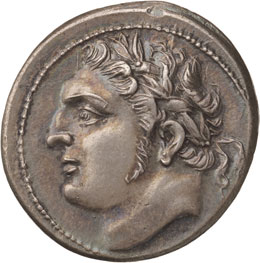 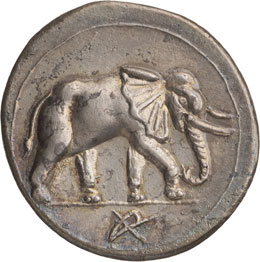 
North Africa. Zeugitania, Carthage, but from a Sicilian mint.
Shekel, c. 211 - 209 BC. (Silver, 6.96g., 22.5mm). Laureate male head to left / Elephant walking right, below, in exergue, aleph. A. Burnett, The Enna hoard and silver coinage of the Syracusan democracy, SNR 62 (1983), 114. SNG Copenhagen 382.
Coins of this type were long thought to have been minted by King Jugurtha of Numidia (118-106 BC), as in Head, p. 884, but their appearance in hoards that clearly dated to the Second Punic War made that attribution impossible. They were then ascribed to Punic forces in Spain, but since most existing specimens have turned up in Sicily it has been suggested that they were minted in Carthage for use by Punic troops on the island. However, since at least one example of the series, a half shekel, is known overstruck on a denarius it seems much more likely that they were struck in a mint controlled by the Carthaginians in Sicily. The head on the obverse is probably a young Melqart, a deity always popular with soldiers, while the elephant was one of Carthage’s most potent weapons in the war against Rome.