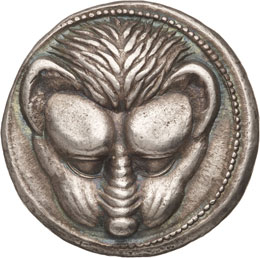 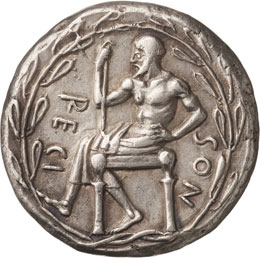 
Italy. Bruttium, Rhegium.
Tetradrachm, c. 450 - 445 BC. (Silver, 17.35g., 25.6mm). Lion’s mask facing; border of dots / RECI – NOS Iokastos, bearded and nude to the waist, seated left on a stool, holding a scepter in his right hand and resting his left on his hip; all within a laurel wreath. C.C. 34 (same dies). Herzfelder 1 (D1/R1, same dies). HN III 2477. Jameson 452 (same dies).
The city of Rhegium (IACP 68) was founded c. 730 BC by colonists from Chalkis in Euboea: its early history is obscure until 494 when Anaxilas, an immigrant from Messenia in the Peloponnesos, overthrew the oligarchy and became tyrant. He greatly increased the city’s power, not least by his conquest of the Sicilian city of Zankle across the straits (which he promptly renamed Messene), and inaugurated the city’s first major coinage: it bore a lion’s mask (a type that became the city’s standard badge) and a calf’s head. Those types probably refer to Apollo (the lion) and to Anaxilas’ territorial claims over Italy (the calf = ϝιταλός = Italia). His second, and more important, coinage bore a biga of mules on the obverse (which refers to Anaxilas’ victory in the mule car race at Olympia in 480) and a hare. Anaxilas died in 476, his tyranny continuing in the name of his sons; they were overthrown in 461. Some ten years later the new government finally initiated the coinage of which this piece is the prototype. The city’s lion’s-mask was retained but Anaxilas’ other types were abolished: the reverse shows Rhegium’s mythical founder, oikist, Iokastos (he was later replaced by Apollo). The outstandingly severe style of this coin is a perfect example of the Greek art of the mid 5th century BC: there are still archaic elements but the strongly muscled vision of Iokastos clearly shows us the more realistic and elegant style that would become so familiar from the sculpture of the Athenian Parthenon.

Grading/Status: A masterpiece of Greek Art. Very rare, the finest specimen of this type known; the first of the ‘oikist’ tetradrachms of Rhegium, and the prototype for the series. A coin of splendid early classical style. Good extremely fine.