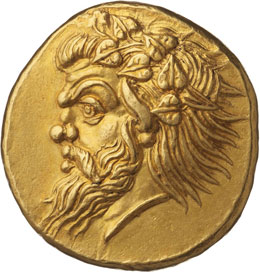 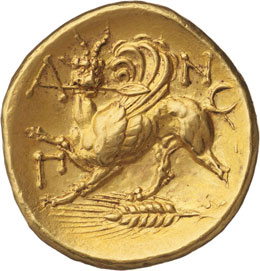 
Black Sea Area. The Tauric Chersonese. Pantikapaion.
Stater, c. 340 - 330 BC. (Gold, 9.19g., 20mm). Head of a satyr to left, with a pointed beard, a goat’s ear and a pug nose, wearing an ivy wreath / Π - Α – Ν Horned griffin, with its head facing and a spear in its mouth, standing to left on stalk of wheat; with the spear shaft forming the crossbar of the alpha in the legend. Franke/Marathaki 138. Gulbenkian 585-586. Kraay - Hirmer 441. K. Regling, Der griechische Goldschatz von Prinkipo, ZfN XLI (1931), 169.
Pantikapaion (IACP 705) was a Milesian colony founded in c. 575; now the modern city of Kerch in the Crimea. By 480 it had become the capital of the Bosporan Kingdom, which from 438/7 to 109 BC was ruled by the powerful Spartokid dynasty. The present coin was probably struck during the reign of Pairisades I (344/3-311/0) when the kingdom was at its height. The staters of Pantikapaion are among the most splendid and desirable of all Greek gold coins. They bear heads of Pan, an obvious pun on the city’s name, and a griffin, the fabled guardian of the gold mines of the Scythians. The engravers who produced the dies for these coins were experts in the Greco-scythian style so popular in the northern Black Sea area, well known today from the amazing treasures of gold and silver work found in the rich tombs of southern Russia. The head of Pan here has very close parallels with those of the Scythians depicted on the famous contemporary gold bottle from the Kul Oba tomb at Kerch, and it would not at all be unlikely that the same master goldsmith was responsible for both. The gold staters were issued over a period of about a generation: they began with two rare issues, one with a profile head and the other with the famous facing head of Pan (SNG BM 855/859); these were followed by an equally small group of the type here; and then to a much larger final series, (SNG BM 864/867). Most of these staters are on a weight standard of c. 9.1g, 1½ Aeginetan drachms, the equivalent in value to a Kyzikene electrum stater, but the terminal issues of the final group were struck on the Attic standard to better fit in with the massive contemporary gold coinages of Philip II and Alexander III (as SNG BM 878).The griffin was a creature, which has a long history in the art of the steppe peoples, and was almost invariably shown as a monster with the body of a lion, complete with powerful legs and claws, and the beaked head and wings of an eagle. Interestingly enough, the griffin we see in ancient art was actually based on a living creature, albeit one which had died out millions of years earlier! The Scythians and other steppe peoples obtained their gold from mines and surface workings in central Asia, often in exactly the same places where modern day paleontologists have discovered abundant fossils of the beaked dinosaur, Protoceratops. A fully grown protoceratops was the size of a lion, and had a powerful beaked head, very reminiscent, especially in skeletal form, to that of an eagle. Ancient miners could have easily seen their fully articulated fossils, either on the ground surface or on the sides of cliffs, just as we can today, and it would be by no means unlikely that the ancient observer would have thought that they had died relatively recently. In addition, since the skeletal remains of humans and animals, overwhelmed and killed in the dangerous sand storms which often afflicted the gold producing areas of central Asia, might also appear in close proximity to the protoceratops fossils, ancient peoples might have assume they had been killed battling each other. Thus was born the concept of the gold guarding griffin. For conclusive proof of this rather extraordinary theory, see A. Mayor, The First Fossil Hunters. Paleontology in Greek and Roman Times (Princeton, 2000), pp. 15-53.